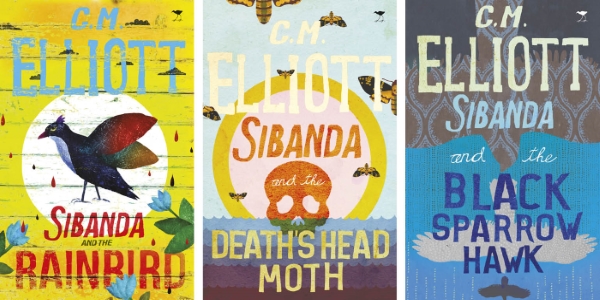 Jacana Media has announced that Anant Singh and Brian Cox of Videovision Entertainment have optioned CM Elliott’s series of detective novels, Sibanda and the Rainbird, Sibanda and the Death’s Head Moth and Sibanda and the Black Sparrowhawk, for possible adaption as a television series.

The crime-writing series focuses on detective inspector Jabulani Sibanda, a hard-boiled, bush-loving, instinctive crime fighter. Together with his sidekick, sergeant Thadeus Ncube, an overweight, bumbling, multi-married policeman, they put their lives at risk as they investigate unique crimes and plumb the depths of Africa’s worst depravities. The series is steeped in the African bush and Matabele culture and keeps one guessing and laughing in turns.

Acknowledged as one of the leading film production companies in South Africa, Videovision Entertainment has produced more than 80 films and has brought to the screen some of the best-known films made in the country, among which are Sarafina!; Cry, The Beloved Country and the Oscar nominees Yesterday and Mandela: Long Walk To Freedom.

“This is such brilliant news and I am thrilled. Thank you Videovision! I have always known that detective Jabulani Sibanda and crew and their slice of rural Zimbabwe would translate fabulously to the screen. It’s been ages since the movie world has depicted African wildlife, so the time is right. What’s not to love – a dashing hero, hair-raising encounters and the glorious African bush. The on-screen adventures of Sibanda will mix the artistry of breathtaking scenery with drama and adventure. I can’t wait!” expressed author, CM Elliott.

Videovision Entertainment’s Anant Singh said, “We are delighted to have optioned this highly entertaining series of books by CM Elliot. She has successfully taken the detective story to a unique and unexpected place and given it a distinctively African character. There is great casting potential in Jabulani Sibanda and I’m certain we will find an actor with a charismatic screen presence who will want to step into this role. We look forward to developing the books into filmed entertainment content that will reach a global audience.”

Media personality, Jenny Crwys-Williams also had encouraging words to say about the venture and shared, “When CM Elliott’s first novel (Sibanda and the Rainbird) landed on my desk, I nearly shouted out loud. At last! A krimi novel from Zimbabwe. But no ordinary novel. Here we were in the Matabeleland bush with characters emerging through the dense bush fully formed. Detective-inspector Jabulani Sibanda, lovelorn, austere and mad about the bush, and his altogether marvellous sidekick sergeant Thadeus Ncube, whose stomach rumbling equals that of a conversational elephant. What a delight those two are, with the bush and a recalcitrant Land Rover both playing significant roles in the series. I can’t imagine anyone not falling in love with the characters who appear in the Sibanda series. A TV series? I’d queue to watch it!”

Publishing director at Jacana Media, Bridget Impey concluded, “We couldn’t think of a more wonderful choice of books. Sibanda will be sure to grab the hearts and minds of an international audience.”